Back in part 2 I went over how to setup a Visual Studio 2013 IDA Pro plug-in project to use the Qt 4.8.4 framework.  Now we’ll discus the basics of creating custom user interfaces.

With the Qt environment there is a build setup with it’s own tool-chain (located in your “C:\Qt\4.8.4\bin” folder).
I’ll briefly cover the key components here:

The most basic C++ object  most everything is derived from is the “QObject” class, then from there the QWidget class is the base class of all user interface objects that you’ll see a lot of it.  Another key one is QApplication but since we’re making plug-ins we’ll only need to occasionally reference IDA’s own instance of this class.

When you work with UIs with Qt you’ll want to use the Qt designer.  It’s a UI design tool similar to what’s in VS (Visual Studio) with it’s dialog and forums editors. 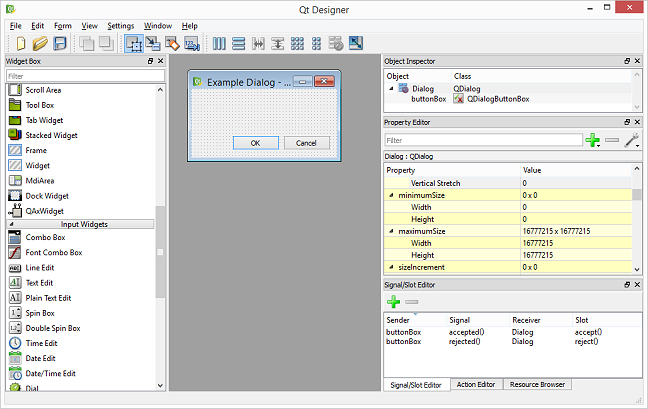 END_OF_DOCUMENT_TOKEN_TO_BE_REPLACED

Unfortunately Visual Studio extensions are version specific.  The one that comes with 4.8.4 is made for VS2010  and probably without doing some major work you won’t get it to build for VS2013.

Go to the page http://www.qt.io/download-open-source/#section-2 and under “Other Downloads”, download the the latest “Visual Studio Add-in 1.xx for Qt5”.  Note just this add-in download, not the whole large Qt5 package.

Install it and now a “QT5” menu should be added to visual studio.  From there you can launch the Qt designer to build custom UIs, etc.